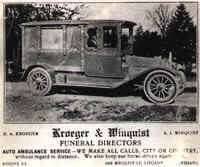 Kroeger Funeral Home was established in 1875 by Bernard A. Kroeger, a German immigrant to the United States. He selected Logansport because it was a thriving railroad center which had also been an important trading post on the Wabash-Erie Canal and the Eel and Wabash rivers. There was also an established German community in Cass County. (Logansport had a German language newspaper at that time.)

The first Kroeger funeral "business" was located in downtown Logansport in the 500 block of Broadway. A fire in the livery stable in 1883 necessitated moving across the street (approximately at the location of the Pharos-Tribune parking lot). In 1935 Kroeger's established the first "funeral home" in Logansport at 10th and Broadway (where the Cass County Family Y is now located).

In 1953 Kroeger Funeral Home moved to the present location at Seventh and Market Streets. This home is the former Fitch-Coleman residence, built in 1834 by Dr. (and U.S. Senator) Graham Fitch. Bricks were imported from England to build this house -- they were transported to Logansport via the Wabash-Erie Canal. Fireplaces were imported from Italy.

This notable house occupies one of the four corners in the central historic district in downtown Logansport. 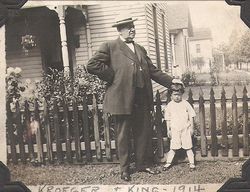 Kroeger Funeral Home was established in 1875 by Bernard A. Kroeger. An 18-year-old immigrant to the United States from Cloppenburg, Germany, Bernard was active in the funeral business until his death on October 18, 1925, following a stroke. A proud and patriotic United States citizen, Bernard "Barney" spoke with a German accent until his death. His marriage to Veronica Hoffman, his childhood sweetheart from Germany, occurred in Logansport at St. Joseph's Catholic Church, the first wedding to be performed in the new church building (now All Saints Catholic Church).

Bernard A. Kroeger's son, George Kroeger, continued the Kroeger family business. With his father, George operated the funeral business as "Kroeger & Son". George Kroeger passed away one day after his 55th birthday on September 21, 1950, of a massive heart attack while playing cards at the Logansport Elks Lodge. (Several witnesses reported that he was dealt a royal flush just prior to his death.)

Paul P. "Pat" Kroeger (George Kroeger's nephew and the third generation in the funeral business) purchased the Kroeger Funeral Home in 1951 (the year following George's death) and moved it to its present location at Seventh & East Market Streets. Pat expanded the current funeral home with an addition and parking lot in 1963. Pat Kroeger passed away June 8, 2000, at the age of 83. 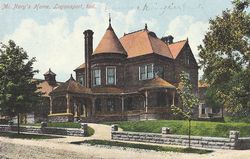 From 1935 to 1953 Kroeger Funeral Home occupied a location at Tenth Street and East Broadway in the former Judge McNary Home. George Kroeger was the funeral director at this location.

This home was the first "funeral home" in Logansport and Cass County. (Prior to this a "funeral parlor" was located in a downtown storefront location with small viewing rooms, or "parlors". Kroeger's was located in the 500 block of East Brodway.) At this new funeral home visitations and funerals could be conducted, eliminating the need to take the body back home.

Some people appreciated the convenience of a funeral home. Others preferred home funerals and that custom continued into the 1950's, especially among rural families.

The McNary Home was a wood-frame structure requiring much maintenance. Interesting to note is that the portico, visible on the left, was too narrow to accomodate then-modern hearses and other motorized livery. Formerly horses and carriages had easily passed through.

The McNary Home was razed in the 1960's. Its final use had been as a collection point by the Cass County Red Cross for hurricane relief supplies.

Pat Kroeger purchased the Kroeger Funeral Home from Mrs. George Kroeger (and George's mother, Veronica "Fronie" Hoffman Kroeger), in 1952. (George Kroeger had passed away in 1951 at the Logansport Elks at the age of 56 years, reportedly having been dealt a "Royal Flush" which he held.) Pat Kroeger renovated the Fitch-Coleman home into a handsome, modern mortuary. Additional chapel space as well as off street parking was added in 1963 with the construction of the east chapel addition and east parking lot.